Just because this post does not deal directly with the Boston tragedy, I don’t want to give the impression I have forgotten what happened on Monday. Actually, it is quite the opposite. Craig and I can’t stop thinking about the bombings that occurred on Monday. We can’t stop watching news updates on TV, reading articles online, and reflecting on that day. It is so surreal that we were actually there went this tragedy occurred.

But with that said, I did want to recap the two days we spent in Boston before Marathon Monday. Neither Craig nor I had been to Boston before, but we were both impressed with the city. I loved how walkable the city was, the old architecture and buildings, I found that it was very clean city, and there were a boatload of good restaurants.

Saturday morning Kristy and I did one last run before the marathon. I like to run two days before the big day and then rest the day before. I love running with my sister.

Kristy, Craig, and I used public transportation the entire time were in the city. We had no problem getting around via bus, train, and subway. It was always very convenient, reliable, and nice not to have to worry about driving and dealing with traffic.

Waiting for the bus.

Kristy and Craig waiting for the train.

As we were walking to the expo Saturday morning, I had to snap a picture of this sign displaying my favorite elite runner: Kara Goucher. 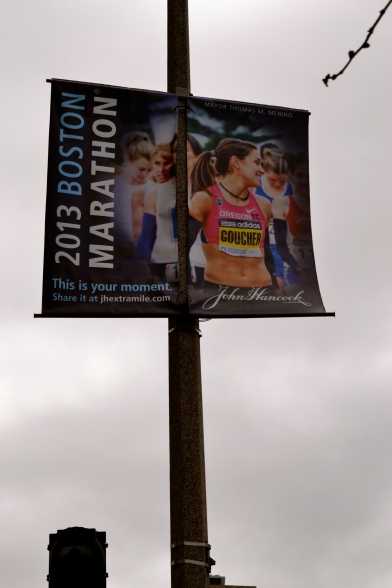 For lunch, we grabbed some brunch at Finagle. I’m not a huge fan of chain restaurants, but we were hungry and this looked good at the time.

It was cool how the workers put the bagel on the conveyer belt and the circular saw behind the glass sliced the bagel in half.

I had the veggie egg sandwich. It was nothing out-of-this-world, but it hit the spot. 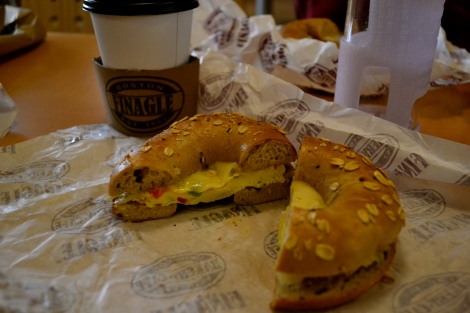 Then we stopped at the finish to take some pictures. Who knew the tragedy that would happen a mere 48 hours later.

And one with the husband. I’m not sure what was going on here. 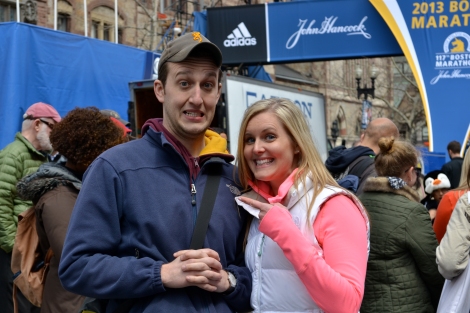 Then it was time to wait in line to see Kara Goucher and Shalane Flanagan who were signing posters at the Nissan booth at the expo. Kristy and I got in line about 35 minutes prior to them starting, so we hunkered down and played on Kristy’s new iPhone. I am old-school and don’t have a iPhone or a smart phone—nor do I text. Told you I was old-school. 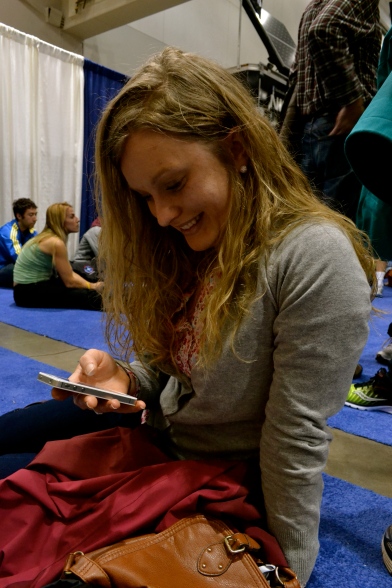 As we were waiting, I was trying to figure out what I was going to say because I was so nervous to meet my running idol (Kara Goucher). I thought about introducing myself by my running name: Miley LoveGu.

In the end, I didn’t say anything. (I was too nervous.) I didn’t even say hi. I walked up the booth, Kara asked how we were, to which we replied good. They handed us the poster and said thank you as we walked away. Ugh. Why couldn’t I have though of something witty to say? Oh well.

On Sunday we met up with my parents and aunt for lunch at an Italian restaurant.

We shared three appetizers and three pasta dishes. The pumpkin ravioli and the bruschetta were a couple of my favorite dishes. 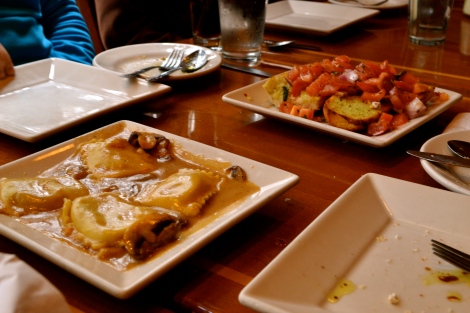 The whole family: Kristy, my aunt, mom, dad, Craig, and me.

Then it was back to the expo to pick up my packet. This was a very efficient process, and it literally took me two seconds to get my bib. As I was walking out of this area, someone stopped me and asked if they could interview me a few questions on camera. I was nervous to speak on camera, so I hope I did okay. They are supposed to send me a link when they post it online, so if that happens, I’ll have to share the video.

Then it was off to a blogger meet-up that Skinny Runner organized. This was my first blogger meet-up ever! (Needless to say there aren’t a lot of other bloggers in Alaska.) 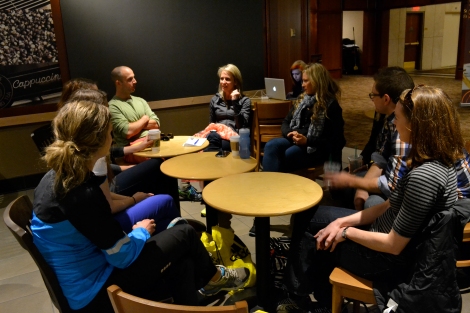 Sunday night Kristy and I decided to take advantage of the free pasta dinner. It was a long, cold wait outside and the food was definitely below par. I definitely wouldn’t go again.

This pretty much sums up our time in Boston. We did do a little sightseeing yesterday (Tuesday) as well before my sister flew back to Minnesota. Today Craig and I drove up to Portland, ME and are enjoying the rest of our vacation sightseeing in Maine—the Alaska of the East Coast.

I'm Michelle--originally from Minnesota, now residing in Anchorage, Alaska. I started running when I was 10 years old and haven't stopped since. Besides being obsessed with running, I enjoy spending time with my husband (Craig), traveling, and being a foodie.