Craig and I celebrated our 6th wedding anniversary on Saturday. We didn’t do anything extravagent, but it was still fun. We went to Kinley’s for dinner (because I had a Groupon that was close to expiring) and ended up staying at the restaurant for 3.5 hours talking, catching up, and planning our future.

This picture was taken at 10 p.m. when we left. 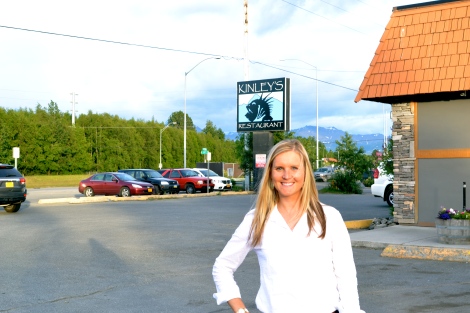 From now on, I’m going to let Craig pick which entree I should get. I narrowed it down to two choices, and he said I should get the pork, which ended up being an excellent option. The mashed potatoes on the side might have been the best part of this entree though; the collard greens (behind the meat) were just okay.

Craig almost always orders the duck entree if it is an option. I snagged a piece, and it was incredibly succulent. I don’t now that I could eat more than a few bites though.

My date with a typical Craig expression.

For dessert we split a piece of cheesecake that contained apricots and bacon. It was very good and hit the spot after our meal.

I am officially over half-way through my pregnancy, but I know I still have a long ways to go!

I have still been feeling good and don’t really feel pregnant most of the time. Although my belly does swell by the end of the day, which reminds me there’s a baby growing in there.

My food cravings and aversions are pretty nonexistent. As a typical runner though, I still do enjoy my carbs and probably eat more dairy products (yogurt and milk) than I used to. I don’t find myself craving as many salty foods as before.

Worst pregnancy advice: “I read that women’s’ bellies get so big during pregnancy because the baby’s farts have nowhere to go.” Craig Baxter, the father of our child.

Everyone keeps asking me if I have felt the baby kick yet or felt any “butterflies.” I have not yet, but I’m sure I will soon.

Ran a route with some hills because the half-marathon I’m going to be running in a couple of weeks has some decent rolling hills. The run started out a little rough (calves seized up, shoes were uncomfortable, I had to go to the bathroom), but after I worked all of those things out, I was fine.

Ran with the girls and took this slow. Thank goodness for easy recovery runs.

I ran on a wooded trail, and I know my GPS didn’t pick up a very good signal throughout the run. Plus, after running with others, it seems my watch is not as accurate as I once though. Both of my friend’s watches would click over to the next mile several seconds before mine. I guess I’ve been running even more than I thought these days.

Took this run easy and didn’t wear my orthotics/insets in my shoes, which was a bad choice because my calves were so tight the entire run. It wasn’t all that great of a run due to this and not enough sleep.

I ran a few minutes slower than I did 3 weeks ago during another 15- miler, but I don’t think it was because I am 3 more weeks pregnant. I still felt pretty good, so I’m optimistic I will be able to give the half-marathon in a couple of weeks a decent go at it.

Off – definitely a much needed break

I'm Michelle--originally from Minnesota, now residing in Anchorage, Alaska. I started running when I was 10 years old and haven't stopped since. Besides being obsessed with running, I enjoy spending time with my husband (Craig), traveling, and being a foodie.